I have some news! But first of all, I would like to thank everyone who sent good wishes about my bad news. I owe about a million messages, but I have been bowled over by the kindness of both friends and strangers, and even though sometimes that kindness made me cry, it has also helped me through.

Second of all, my apologies for being so long away without any substantial updates, though I have tried to put up pictures showing I yet live. (As one does in hostage situations! But without holding up newspapers to show the date.) Stuff happened, such as the month-long celebration of the famous holiday, Constantly Throwing Up March. Use of one’s laptop is not advised during Constantly Throwing Up March.

Thirdly, and to widespread relief, one cannot always be talking about bad news and Constantly Throwing Up March. I actually have a different story to tell today.

So, a few years ago, I was feeling super stuck and unhappy about my writing. I was very honoured to be asked to write a short story for the anthology MONSTROUS AFFECTIONS, and I wrote a… slightly long short story about a magical world full of harpies and mermaids, and a boy with wings. (Everyone’s gotta write one story about somebody growing wings.)

I really enjoyed writing the story. And one of the other main characters, a boy from our world who played the role of fish out of water, constantly wandering around and asking the eternal question ‘Excuse me what the HELL is going on?’, caught my eye.

My first fantasy novels were Tamora Pierce’s Tortall books, which feature (among many other things) young people training to be warriors in a magic landscape, and maybe-not-so-monstrous-winged monsters. There are a ton of stories about kids stumbling into magic worlds—from the Narnia books to Philip Pullman’s The Subtle Knife–and learning in magic worlds—Jill Murphy’s Worst Witch series, Eva Ibbotson’s The Secret of Platform 13, Neil Gaiman’s The Books of Magic, those little-known Harry Potter books.

It occurred to me that it might be very easy to lure kids of the generation just waiting for their Hogwarts letter into a magic world. (Stranger in a van with candy… mermaid candy!) And it occurred to me that it would be fun to write a character who was a nerd used to books and comics and movies about superheroes, because I am a nerd. There is a scene in THE LION, THE WITCH AND THE WARDROBE where the magic lion makes one of our heroes pick up a sword and slay a talking wolf (who is admittedly about to eat his sister). There is a special place in my heart for the hero who picks up the sword and goes forth. There is also a place in my heart for the guy who goes, ‘Excuse you, I am twelve! Can we call animal protection services? Can we call child protection services? Show of hands or hooves—does anyone have tranquiliser darts?’ I thought it would be fun to show someone in one of their favourite fantasy worlds, appalled by the reality as well as charmed by the fantasy, revolutionising it by accident.

I evolved, in my fevered brain, a Cunning Plan. I would write a prequel for the short story and put it on my blog! It would promote the anthology! And it would be a gift for my beautiful readers, whom I love for reading my stories when there are many funny cat videos on youtube!

What a good plan!

I liked writing the story so much that once I lied to my friends that I was on deadline, and wrote on a picnic bench in a pub garden, half laughing at a table with my friends, half in a magic land, and altogether happy.

Quite a long time later, I was on a writing retreat in Cornwall, making excessively cheese sandwiches and chatting with my friend Holly Black, who is wise like a genius owl and looks like Goth Snow White.

“So, why are you writing a book on your blog?” Holly asked.

“I’m not…” I spluttered. “The very idea! How dare! I would never do something so!”

It was true that the short story had ended up split into different parts because of length constraints, but that was not my fault.

“Oh, okay, let me rephrase,” said Holly. “Why is the short story on your blog a hundred thousand words long?”

IMPORTANT MEMO #2: The only time I have managed to write a typical length novel was when writing from the point of view of a demon who was really not great with words.

IMPORTANT MEMO #3: Stop me before I kill again.

“It is not,” I riposted wittily. “That would be ridiculous, and I don’t do ridiculous things!”

“It is,” said Holly. “I copy and pasted all the parts into a word document.”

“So I could read it comfortably,” said Holly.

“But you put it on the world wide web,” Holly pointed out.

I could not argue with her logic.

I collapsed with blushes amid the cheese.

After giving the matter some thought, I realised that I had done this ridiculous thing. Now, writing is my joy, and I was very happy writing this book, but writing is also meant to pay my electricity bill.

A book up on the internet did not seem likely to do that. Also, a book in which the main characters went from very-innocent thirteen to not-so-innocent seventeen was tricky. Also, a book in which the protagonist wandered around being in unrequited love with elven warrior maidens, rocker boys, and mermaids might be a hard sell. Moreover, because… this is how the internet works… a few people had shown up on my blog and were being pretty unpleasant about the story, insulting me for not being a real writer or demanding various things. I finished the book and told myself that I should learn from this experience.

But then a funny thing happened.

People kept writing to me about the book. Readers would come to me and tell me it was how they discovered me, and tell me that they would really love more. Artists of enormous skill drew me gorgeous fanart. Other writers who I respected would tell me they’d read and enjoyed it. The book did not seem to fade from the minds and hearts of people, and because of how they felt, I began to feel different as well: I got back to the feeling of writing in a summer garden, half in this world and half in another.

And I found myself wanting to write more: the book had what I thought of as a Personal Resolution but not a Romantic Resolution, as the romantic resolution was in the short story. Except that was from a different character’s point of view! People wanted to see the hero’s side of the story, and what happened next! But I told myself sternly that it could not be.

Some time later, two of my friends were going on a road trip through the South (of the Americas). I couldn’t go on the road trip but we arranged to meet for the weekend in Savannah.

When I arrived in Savannah, I checked my email. There was an email from Kelly ‘Pulitzer Finalist’ Link and Gavin Grant, proprietors of Small Beer Press, asking if they could publish my internet novel for real. I went and sat down in the airport Starbucks and stared at it for a long time.

HOLLY: You haven’t answered your email.
SARAH: How do you know about my email?!
HOLLY: I know everything.
SARAH: I have to work out the best way to say no.
HOLLY: Oh… do you not want to do it?
SARAH: Well of COURSE I want to do it.
HOLLY: ….
SARAH: But I can’t let Kelly and Gavin do this to themselves!
HOLLY: …
HOLLY: Are you seriously being Spiderman right now?
SARAH: I am quite quippy.
HOLLY: Are you for real breaking up with your girlfriend—or publisher—for their own good?
SARAH: …
HOLLY: I think they offered because they WANT to do it.
SARAH: … Really?

And so it came to pass that I accepted the offer, and Kelly sent me wonderful editorial notes, and I edited. And I wrote a good bit more. I wrote a Romantic Resolution. I wrote a Friendship Resolution. I went back in time and wrote more of the hero in our world, making no friends. I went back and wrote the hero in the magic world, trying to make new friends and making friends he didn’t expect. I wrote fifty thousand words more.

IMPORTANT MEMO: See important memo 1 about the typical length of books. I wrote another half of a novel. I must be stopped.

Last year in Mexico (I am a wanderer who carries her home on her back, or at least on wheels beside her) Kelly Link and Holly Black ganged up on me in a swimming pool.

KELLY: It’s a different book now, and I think it needs a different title. Do you have any ideas?
SARAH: Solidly, no.
KELLY: I have an idea.
HOLLY: You need to fix this sex scene. And write a lot more of it.

Holly and I were sharing a room that retreat. Holly is an excellent Editorial Guilt Alarm Clock.

So it came to pass that there would be a book. And not long after that, I realised that I was sick, and the only way to get better was to get a whole lot sicker, and I was even happier that there was going to be a book in 2017.

The internet version of the story will be taken down in two weeks. I do not want to rush you guys and I hope this is fair warning! The book would not exist without the help and sympathy and love of my friends and my strangers.

The new book, with new fights and new friendships, with unicorns and mermaids, and the charm and danger of magic, and a cranky stone-cold pacifist hero in magic warrior land, is called IN OTHER LANDS. It features gorgeous interior illustrations and cover art by the super talented Carolyn Nowak. 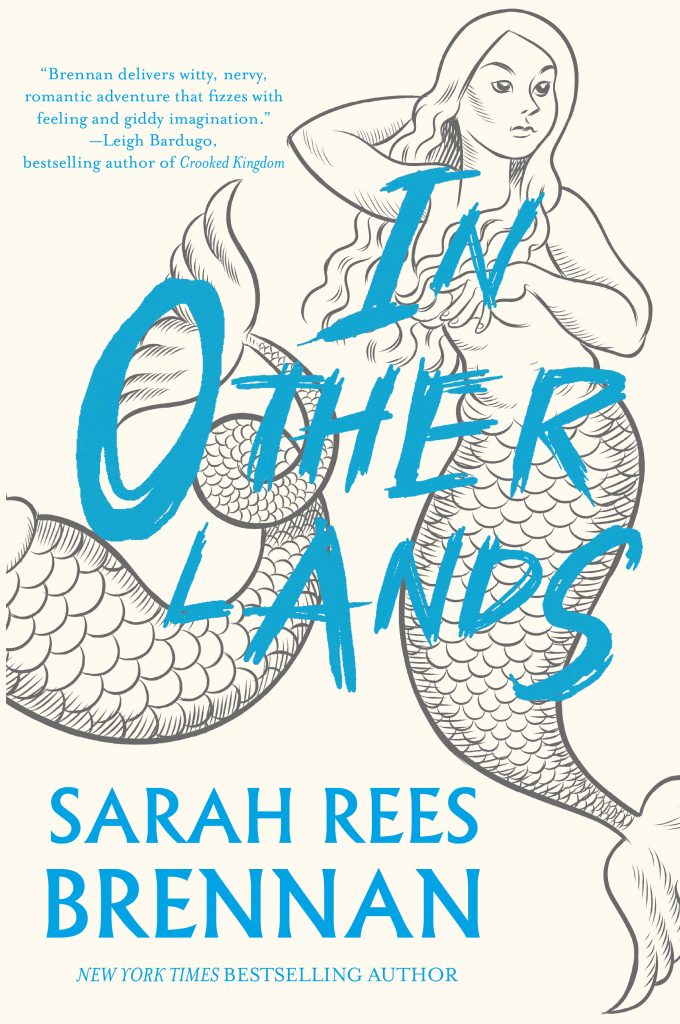 In Other Lands comes out August 15. (This is a shameless buy link.)

I am nervous and excited about it, and I hope you guys will be excited too!